Samir Chatterjee is a virtuoso Tabla player. He travels widely across the world throughout the year performing in numerous festivals as a soloist or with other outstanding musicians from both Indian and non-Indian musical traditions. Samir performed at the 2007 Nobel Peace Prize ceremony in Oslo, Norway. He also performed at the UN General Assembly. His compositions are widely acclaimed as well as his writings. Samir is a firm believer in the transforming effect of music on the society and all aspects of his work reflects this conviction.
Chatterjee began his studies early with Bankim Ghosh, Balaram Mukherjee, Rathin Dhar and Md. Salim. His later formation as a musician occurred under the guidance of Amalesh Chatterjee and Shyamal Bose. All of Samirs teachers have been from the Farrukhabad Gharana of Tabla-playing, which he now represents.
Samir can be heard on numerous recordings featuring as soloist, accompanying many of Indias greatest musicians and in collaboration with western musicians of outstanding caliber. In concert Samir has accompanied many of Indias greatest musicians including Ravi Shankar, Vilayat Khan, Bhimsen Joshi, Pandit Jasraj, Nikhil Banerjee, V.G. Jog, Shivkumar Sharma, Hariprasad Chaurasia, M. S. Gopalakrishnan, Amjad Ali Khan, Salamat Ali Khan, Lakshmi Shankar, Manilal Nag, L. Subramanium, U Srinivas, Veena Sahashrabuddhe,  Shujaat Khan, Shahid Parvez, Ajoy Chakraborty, Nishat Khan, Rashid Khan, Tejendra N. Majumdar, Arti Anklekar, Kaushiki Chakraborty, to name only a few.
Samir Chatterjee lives in the NY-NJ area and has been a catalyst in the fusion of Indian and Non-Indian music, in his own creations and others as well. He performs with Pauline Oliveros, William Parker, Branford Marsalis, Ravi Coltrane, Joshua Bell, David Liebman, Oliver Lake, Dave Douglas, Ned Rothenberg, Mark Dresser, Mark Feldman, Jerome Harris, Eric Friedlander, Steve Gorn, Dance Theater of Harlem, Boston Philharmonic, Minnesota Orchestra, and other jazz, classical and avant guard musicians and ensembles. He also collaborates with Sufi-Rock singer Salman Ahmad of Junoon from Pakistan. He is the composer and director of Tablaphilia, Indo-Flame, Chhand-Anand, RabiThakur, Meghadootam, and Dawn to Dusk and Beyond. He performs with Sanjay Mishra on his CD Blue Incantation featuring Jerry Garcia as guest artist. 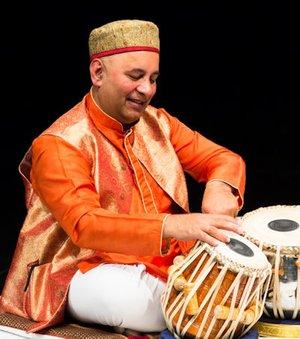